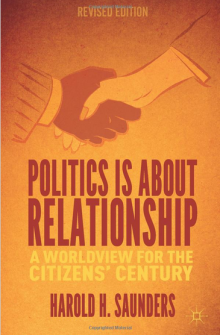 Politics Is About Relationship

An exploration and assessment of recurring troubles facing humanity. Hope is combined with realism based on confidence in the energies and capacities of individuals as civic agents outside government to meet the pressing challenges we face today. 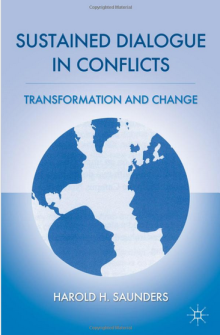 People in our deeply, angrily divided world desperately need peaceful and productive ways of relating to each other. Rooted in four decades of intense experience in deep-seated human conflicts, Saunders presents a peaceful way of transforming destructive relationships and designing change. 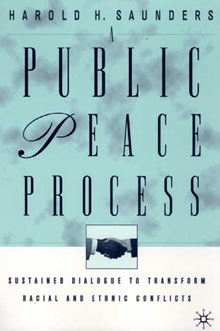 Harold Saunders, Former Assistant Secretary of State in the Carter Administration, with extensive experience in the US government, particularly on the Arab-Israeli conflict and later as Director for International Affairs at the Kettering Foundation, presents a step-by-step approach to organizing sustained dialogue in conflict situations.

SDCN Program Director Michaela Grenier contributed an article to the 2019 issue of the Higher Education Exchange journal, which is a journal published annually by the Kettering Foundation. Grenier’s article describes the Sustained Dialogue (SD) process, applications of the SD process on college campuses, and the impact of participation in SD campus programs on college students’ civic leadership development.

Sustained Dialogue Campus Network team members Elizabeth Wuerz, Rhonda Fitzgerald, Michaela Grenier, and Ottavia Lezzi contributed a chapter to Creating Space for Democracy: A Primer on Dialogue and Deliberation in Higher Education (edited by Nicholas V. Longo and Timothy J. Shaffer). Creating Space for Democracy is a resource book for higher education professionals seeking dialogue and deliberation methods to apply to their campuses. The SDCN team’s chapter describes the Sustained Dialogue process and current applications of the SD process on […]

Flint (2019) Healing a Divided Nation In the wake of the U.S. 2016 election, national media has highlighted the divided nature of our country. Considering this division, dialogue is often pushed as the tool for reconciliation, healing, and bridge building. This paper takes up this call through considering the spatial practices of the Sustained Dialogue Campus Network. This turn to space makes possible a consideration of division beyond geography that takes seriously how local and global spaces are produced and […]

SDI’s president, Rev. Mark Farr, has contributed a chapter to Peace Building Through Dialogue: Education, Human Transformation, and Conflict Resolution (edited by Peter N. Stearns), a collection of essays about the many dimensions of dialogue. His contribution draws from his rich journey through life as a psychotherapist in private practice, a Christian priest, leading an organization devoted to political reconciliation on Capitol Hill, and working at Sustained Dialogue primarily on matters of international diplomacy to compare and contrast the unique […]

The roots of conflict, whether international, community or interpersonal, are most often expressed in antagonistic attitudes or perspectives towards ‘the other’. Such attitudes frequently are deeply embedded and resistant to change. Yet lasting resolution of conflict is difficult, if not impossible, unless such attitudes of hatred, mistrust and anger can be addressed. This article begins with insights from science that shows that transformation of such perceptions under certain circumstances can occur. We then describe a well-tested but little known approach […]

Sustained Dialogue: How Students Are Changing Their Own Racial Climate

In 2006, Priya Parker, realizing the University of Virginia’s campus climate needed dialogue, created a student-led process to improve race relations. The campus approach brings small groups of students from widely different backgrounds together for a year of deep conversation.

by Life and Peace Institute

Dialogue and interethnic trust: A randomized field trial of ‘Sustained Dialogue’ in Ethiopia

Using a stratified randomization process, participants were selected to a two-term Sustained Dialogue program at Addis Ababa University, Ethiopia, in 2009–10. Immediately following the dialogue intervention, an attitudinal survey and a behavioral trust game were conducted with a group of 716 participants and non-participants.

This study examined the civic outcomes of the Sustained Dialogue model. Qualitative interviews investigated the perceived impacts of dialogue experience on post-graduate civic life, generating an inventory of 29 dialogue civic outcomes across five domains: 1) cognitions, 2) behaviors, 3) attitudes 4) skills, and 5) hopes and plans for the future.

Constructing Ourselves, Constructing the Other: The Challenge of Reconciliation in South Africa

by Anastasia White and Teddy Nemeroff

This article describes an ongoing Reconciliation Initiative undertaken in partnership between the Institute for Democracy in South Africa1(Idasa) and the Gauteng Council of Churches 2(GCC). This Initiative launched in May 2004 now has six regional dialogues at local level, each focusing on a different aspect of reconciliation. The project is grounded in social constructionist principles and merges the Appreciative Inquiry (AI) and Sustained Dialogue3(SD) methodologies. This article explores how these theoretical groundings and merging of methodologies are working to tackle the question of reconciliation from a positive approach. The central hypothesis is that history can be a “positive possibility” (Cooperrider et al, 2003:21) and through a series of Sustained Dialogues our constructions of self and the other can be a process of remembering ourselves into new ways of being.