Transformed relationships around the world

We have reached out to

This study, conducted in 2008, interviewed college graduates who had participated in Sustained Dialogue programs in college. Previous research had demonstrated the positive impacts of dialogue during college, but this study asked “How do recent college graduates understand the influence of their college dialogue experience on their post-graduate civic life?”

Their participation impacted them in five different ways:

Participants stated that SD impacted many of their major life decisions and how they want to raise their own children. This study found that participants developed civic skills that they used at work and in graduate school, and that these skills permeated their personal lives as well. One participant says: “It’s just a part of me and it changes how I look at things.”

In a randomized field trial* conducted comparing two-term SD participants at Addis Ababa University in Ethiopia with students who did not participate, the study found statistically significant attitudinal change:

SDCN also conducts pre- and post- dialogue surveys for student participants based on key measures from questions similar to The National Survey on Student Engagement, NSSE, and the Consortium on Financing Higher Education, COFHE. These surveys demonstrate:

Participants saw strong increases in some of their personal skills and/or actions because of their time in dialogue, including, but not limited to:

Before and After SD: How much do you agree with the statement: 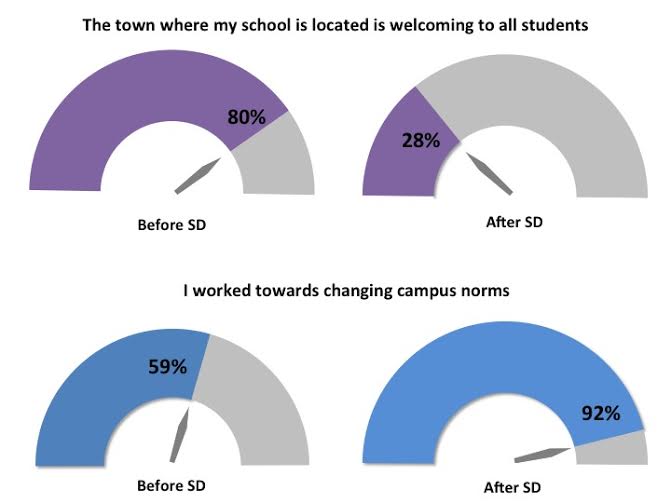 Compared with NSSE statistics, total percentages of participants who responded “Very often” or “Often” to the following questions were as such: