Constructing Ourselves, Constructing the Other: The Challenge of Reconciliation in South Africa 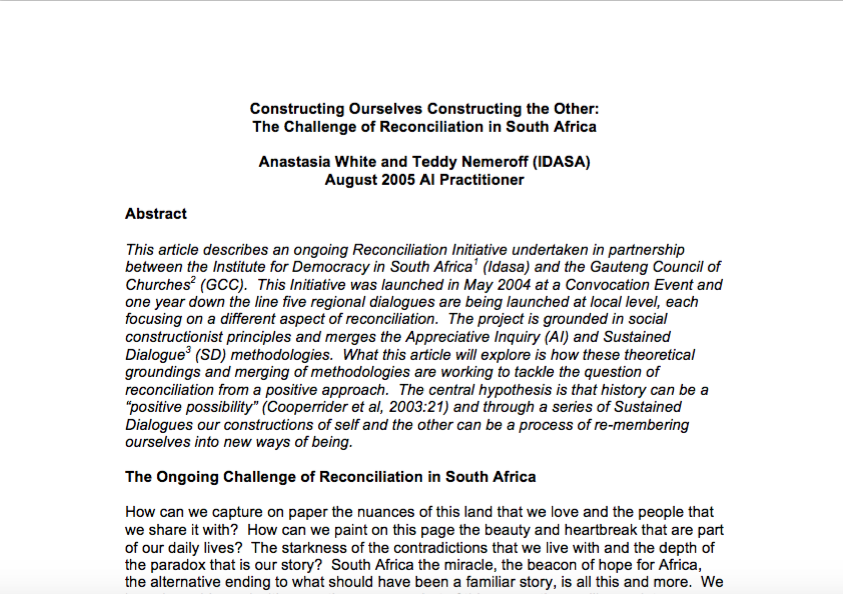 This article describes an ongoing Reconciliation Initiative undertaken in partnership between the Institute for Democracy in South Africa1(Idasa) and the Gauteng Council of Churches 2(GCC). This Initiative launched in May 2004 now has six regional dialogues at local level, each focusing on a different aspect of reconciliation. The project is grounded in social constructionist principles and merges the Appreciative Inquiry (AI) and Sustained Dialogue(SD) methodologies. This article explores how these theoretical groundings and merging of methodologies are working to tackle the question of reconciliation from a positive approach. The central hypothesis is that history can be a “positive possibility” (Cooperrider et al, 2003:21) and through a series of Sustained Dialogues our constructions of self and the other can be a process of remembering ourselves into new ways of being.

Anastasia White, Ph.D. graduated from Case Western Reserve University in 2004. Born and raised in South Africa, she has been a practitioner and academic in the field of peace building for fifteen years. She is currently the manager of Idasa’s Dialogue Unit that has active projects in South Africa, Zimbabwe and the Democratic Republic of Congo.

Teddy Nemeroff is a Sustained Dialogue trainer, moderator and consultant. He has used the process for seven years; having begun a race relations initiative among fellow students at Princeton students. Since 2003 he has been working at Idasa to build a local Sustained Dialogue program, working in the areas of local governance, reconciliation and violence prevention.